Many times I prefer to use a form to navigate records rather than a table. Each form has a single record with next/prev/first/last buttons. The form is read only with a switch to make it editable.

I can’t find any examples of how to do this - anyone have advice for me?

I’ve got this part way figure out. Here is what I have so far:

First off I need a record pointer so I created a temp state var called sourceRowID (my table name is Source) and initialize it to 1. Then I create a create a query that gets the row count of the table. I create a JS query that increments sourceRowID but checks to make sure it is not past the end of the data set using that row count query:

I make another JS query to decrement sourceRowID:

I create two buttons labeled “Prev” and “Next” and assign them to the queries.

I then add my form elements and set the values using the Default Value property like this:

Adding first and last buttons should be self explanatory at this point.

To up the complexity a bit, I also added a table from the same query so the user could browse however they wished. I added this JS Query to the Row Selected trigger of the table which moves the form to the selected row:

I should also point out that I added a sequential number field to the query like so which allows me to set the correct data pointer no matter the current sort order of the table:

Three major flaws, in order of importance, I see in this strategy so far.

This type of form navigation was very popular in databases like Access, FoxPro, Alpha 5 which were used by internal devs and power users to do exactly what Retool is trying to do, just in the browser rather then the desktop.

Hi Brad! Welcome to the community!

Thanks for sharing! Sounds like you’re off to a good start. Hopefully these answers can get you a little further:

Ben, thanks for the welcome.

For a very long time I have been looking for something that allows me to easily build powerful web based database front ends, but still allow me to have my data stored where I want, like I used to do with Access on the desktop. I have been disappointed time and time again by complexity, time and feature weakness. Retool comes closer than I have yet seen, so expectations are high! I will probably overload your Feature Requests forum.

Thanks for the tips. The problem with setValue() though is that property is for the Text component, not the Text Input component. And I don’t see a clean way to get to the rendered input from the Dom so I can change it there.

The setValue() function should be available for both text and text input components. Although there isn’t a GUI input to update the value of the input component, you can call this function inside of a JS Code Query in order to change the text value!

That function was not available when I tried to use it in JS. I just tried again because you insisted it exists and well, it does. Don’t know what I was doing before. Using the Default Value GUI input is actually working quite well, but now I’ll consider refactoring where I fill the values.

BTW, I now have linked subforms and subtables (and sub sub tables) working in my app and I needed only a little extra wiring to get it working.

One downside is that the component UIs are all very heavy, so trying to fit First, Prev, Next, Last and record counters takes up a lot of screen real estate and there is no room for any button text to show up. I have attached a screenshot. Any suggestions? 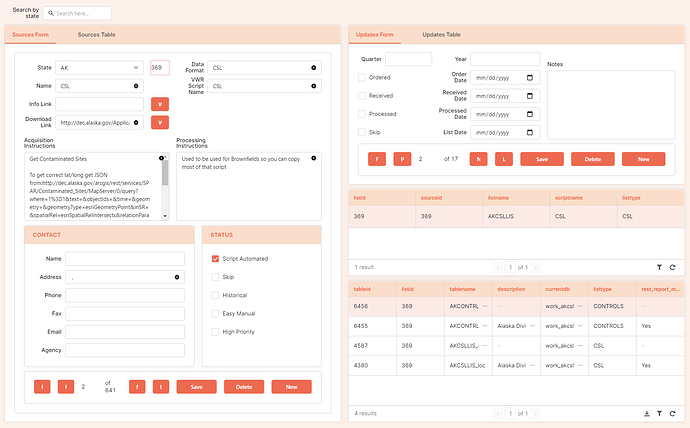