When Retool releases under-the-hood changes that we can't opt out of or coordinate, it affects release of working changes because instead of having a nice discrete release, we end up with dozens or even hundreds of trivial additions/modifications to components, making it:

a) difficult if not impossible to distinguish why a hypothetical problem began occurring
b) noisy to view the diff to see our actual changes, vs. Retool's

I'm in the habit of performing a "Compare changes" step before I begin editing, but it's easy to forget and sometimes it seems a blanket under-the-hood change occurs mid-way through my editing; often times it is not feasible to undo all my changes to just release Retool's changes separately.

See screenshot below, featuring the addition of error: null fields on many of my app's components, which happened moments ago.

(Note: redacted areas look a bit odd but wanted to make sure I didn't include any sensitive company info. Assume normal query URLs and component names.) 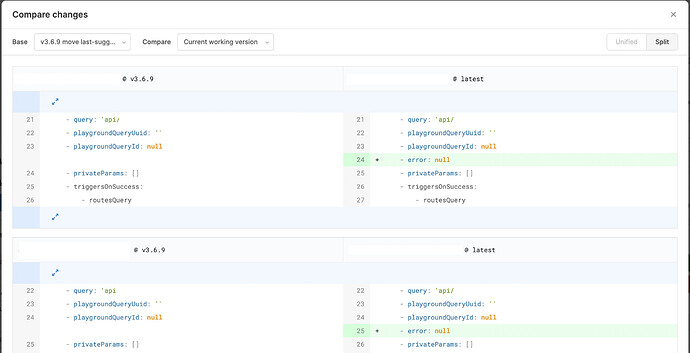 Hi @dguzzo,
﻿
﻿I filed this request internally and the team is following up with some additional questions.
﻿
﻿What are the exact changes that you would like to be shown?
﻿Would this be shown per app, or per component of each app?
﻿Where would this changelog be located?

Thanks for following up.

What are the exact changes that you would like to be shown?

Would this be shown per app, or per component of each app?

Where would this changelog be located?

Forgot to follow up here and thank you for the updated description! I've updated the report and will reply here once there's any new news.